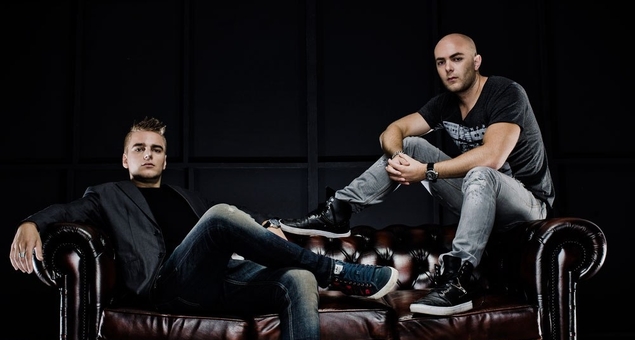 Showtek is a Dutch electronic dance music act consisting of two brothers, Sjoerd Janssen and Wouter Janssen, who began producing music in 2001. Starting out with techno and subsequently moving to hardstyle, they eventually worked in other EDM styles including progressive/electro house. In 2012, the Showtek brothers began a series of collaborations, a project called Crazy Collabs, with producers from some of the other genres in dance music. Before the official announcement of their collaboration, they co-produced an EP with Tiësto and Angger Dimas entitled “We Rock” as Boys Will Be Boys. On their project, they have worked with Tiësto, Hardwell, Justin Prime, Bassjackers, Ookay, MAKJ and hardstyle duo Noisecontrollers. “Baldy & Cresty” are the cartoon alter egos of the two brothers. Showtek also co-produced the upcoming single of Chris Brown – Nobody’s Perfectwhich is produced by Lukas Hilbert and co-produced by Showtek and David Jost. The Showtek brothers also have their own podcast, available through their website and iTunes. In December 2013, they founded their own label Skink Records, which is a sub-label of Spinnin’ Records.

The duo recently founded their own label “Skink Records”, which is licensed to Spinnin Records but is however not a sublabel of Spinnin. The song “We Like To Party” by Showtek was the first title to be released under the new label, Bouncer with Ookay and a Showtek Edit of MAKJ & M35 – Go followed.

On June 9, 2014, a new album was announced, returning them to their hardstyle roots. This turned out to be a rumor created by a rave news publisher, and Showtek announced on their official Facebook page that the album was not in production, as well as emphasising the duo would not be returning to hardstyle.